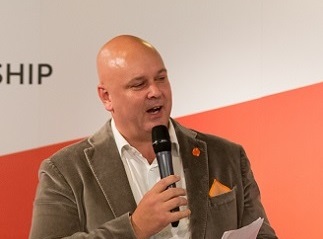 Kees de Jong is an entrepreneur, investor, speaker, mentor and writer.  Since he launched Blue Research  in 1993, when he was still a student at Erasmus University Rotterdam, Kees has gone on to be the CEO of a number of fast-growing businesses in the Netherlands and abroad.  From 2008 to 2013, Kees wrote a weekly column on entrepreneurship and growth for the Financieel Dagblad, the premiere Dutch business and finance publication. His columns were collected and published as ‘Het Groeiboekje’ (2010) which was followed up by ‘Groter Groien’ (2013).

His sense of humour helps Kees  get his message across: he advises entrepreneurs to think bigger, dream smarter, create big goals, and then track the numbers regularly to see if they are on target. As a mentor – which he feels all entrepreneurs need – he helps entrepreneurs to expand their dreams, sharpen their growth strategies, and take their businesses international. Above all, he believes that entrepreneurs have to work on themselves in they want to stimulate growth and accelerate success.

A hands-on, 10-week programme for SME entrepreneurs that want to innovate and grow. Get feedback from fellow entrepreneurs and experienced innovators.